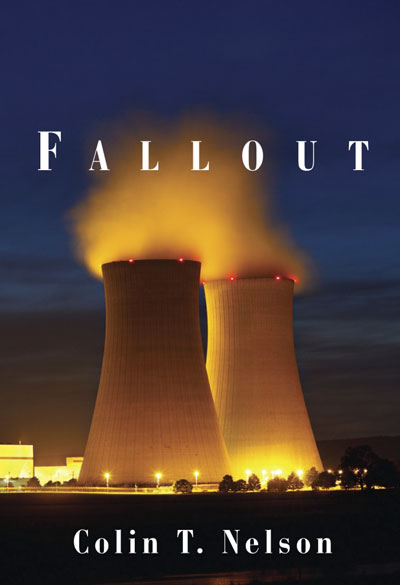 What if a terrorist lived  next door but you didn’t know it?

Nominated for the 2012 Minnesota Book Awards

They are connected to an international criminal network that trafficks anything illegal!

A young female prosecutor, Zehra Hassan, tries to prove a murder case which pulls her into the terrorists’ plot.  She’s threatened herself and must stop the network before it explodes into annihilation.

What people have said about “Fallout”:

This book is absolutely “unputdownable!”  Once you start reading it you want to do nothing else ’til you have finished it.

“Fallout” is the type of book that will keep you thinking for weeks after you have read it.  The plot and characters are dynamic and entertaining.  With all of the mystery and complexity one could ask for.  An exciting, must read thriller!

“Fallout” pulls you in and keeps you turning pages as you connect the dots of this intriguing plot with Zehra.  Love that gal!  I enjoyed getting to know her as she struggles with the everyday elements of her life—job, relationships, religion, and family.

Marko knew if they caught him, they’d kill him.

He had been hidden behind locked doors in the basement of a church, the nerve center of the operation geared up for the End.  The preparations had taken years of networking across the country.  Infiltration of the plants to discover the security codes and learn the lay outs and the secret consultations with engineers to decide where to place the charges, had been a struggle for all of them.

Marko had hoped to slip out the side door of the church undetected.  Before he could reach his car to escape, someone burst through the door and came after him.  He panicked and ran.  It was probably Menendez, the most violent member of the security detail hired by the church.

Marko slowed as he reached his car.  Did he have time to unlock the door, get inside, and escape before he was caught?  No.  He veered off toward the long street that ran into the small town of Hamel, Minnesota.  I was a quiet area, except for the closed bars and a strip joint.  Maybe he could out run Menendez.

This late at night, the town sank into quiet sleep.  Marko knew there was a Super America station still open at the far end.  If he could make it there, he’d be safe.

He ran harder, hearing his leather shoes slap on the damp pavement.  Earlier, a soft rain had drizzled over the streets.  He felt the burn in his lungs, clawing for more air as he lunged ahead.  Somewhere to Marko’s left a dog barked twice.  When he dared to glance back, he saw Menendez gaining on him.  the yellow light from a street lamp glinted off the silver gun in Menendez’ hand.

Marko dodged around a parked car and up across a lawn that smelled of wet grass.  He slipped but gained traction as he ducked behind the only house on the street, hoping to lose Menendez.

His mind darted back to better times, when he and Menendez and the others from the church had come down from Canada for the first “test run” to see if they could make it.  Marko remembered the dangerous journey across the border at night and how they had traveled down through the lake region of Minnesota.  In the morning he’d seen men out in fishing boats, pulling golden walleyes out of the clear water.  The fish had flopped and jerked in an effort to get free of the hook–just as Marko did now.

He curved around the back end of the small house, saw an open alley and ran for it.

Between the house and alley, Marko hit a low chain-link fence.  It was too tall to jump over so he stopped to climb up the edge and fell over the far side.  He gasped for breath, certain his chest would explode.  He had to get up and run.  Feeling in his pocket to make sure he still had the flash drive, he scrambled to his feet.  Menendez grunted as he rounded the corner of the house close behind.  Marko spurted toward the alley.

Two years earlier, it had all seemed so right to him.  A friend had introduced Marko to the church that seemed to offer answers for all the things he knew were wrong in the world.  It was a small congregation, and their secretiveness had startled Marko at first, until he realized that their message caused people outside the church to become upset.  But without a family, he had found warmth and friendship there, so when they had asked him to use his software skills for their plan, he had readily agreed.

And he agreed with their message that the End Times were upon them.  Americans were too consumed by material matters and hedonism to recognize the signs, but the church saw them all.  Marko felt reassured to be one of the “chosen” who would survive.

But when the plans had mushroomed across the country, he became worried.  Security increased, and they forced people like Marko to finish their work.  Marko discovered the plans were more destructive than he had ever imagined.  The leaders blackmailed him with threats of going to law enforcement if Marko didn’t cooperate.  He was scared for several months until something inside him snapped, and he knew he must act first to protect himself.  He stole the flash drive with all the details of the network’s plan.

It was the only thing he could use with law enforcement to strike a deal with them and be lenient to Marko.

Marko gained speed down the alley.  Without street lights, he could fade into the shadows.  After years behind desks, he knew his body was out of shape and couldn’t run this hard for very long.  If he could elude Menendez for two more blocks, he’d reach the gas station.

He tried to push himself faster, hearing the gasps from his lungs pumping harder.  His head hurt.  Behind him, Marko heard the splash of Menendez’ boots through the puddles in the alley.

Coming out of the alley, Marko leaped toward the street again.  He had to run between two deserted buildings, turn hard to the right around a bar called “Inn Kahoots,” and sprint one more block to safety.  Sweat dripped into his eyes, making it hard to see.  Long before, his glasses had fallen off his slippery face.  That made it difficult for him to see well.

His legs screamed in pain and his chest heaved up and down.  In the darkness next to the last building, he tripped over something on the ground.  His face scraped across the pavement, shredding his skin.  He knew Menendez was close behind.  Marko struggled up, found his footing, and lunged toward the open street in front of the building.

He heard the slap of Menendez’ arms along his chest.  Marko saw the Super America ahead.  Maybe he’d make it.

He dodged to the right.  He saw a man and a woman in a short pink dress stagger out the front door of the strip joint.  He meant to avoid them, but in his exhausted state he smacked into her.  People screamed and Marko fell, rolling across the pavement to stop on his side.  He saw a crushed Budweiser can at the curb.  Marko struggled to his feet and heard a flat pop that echoed off the building behind him.  He could see the golden yellow lights reaching out to him from the windows of the Super America.  He would make it.

That’s when something slammed into the back of his head and threw him forward.  Marko had just a moment to look across the street again and see the golden fish getting free of the hook before he died.

If you like what you’ve read and want to buy the book, go to: