My new book, The Inca Code, is officially published this Friday, June 9! 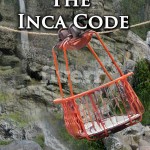 When investigator, Pete Chandler, gets a call for help from an old friend and colleague at the U.S. Export/Import Bank in South America, Pete drops everything to go.  Before he can get there, the friend dies in a freak accident—he falls from a tourist ride into a deep river gorge.  Investigating the death in Ecuador, Pete discovers his friend has led a double life that’s pulled-in South American law enforcement and Chinese gangsters.

As Pete digs into the mystery, he becomes a target of forces who believe he was involved with the dead friend’s crimes.  Now, Pete must fight for his own survival in a race that leads to the heights of the Andes Mountains, Machu Picchu, and the ancient secrets of the Incas.

For just a few days, the ebook version of The Inca Code will be on sale as follows:

Even though this is offered through Amazon/Kindle, other readers can also download The Inca Code as directed on the Amazon site.

You’ll like the story and the travel through South America to Machu Picchu!  https://www.amazon.com/Inca-Code-Chandler-Travels-World-ebook/dp/B06Y5TPL2Q/ref=sr_1_1?s=books&ie=UTF8&qid=1496842432&sr=1-1&keywords=colin+nelson