Alleged sex offender, Victor Barnard, has been captured in a beach resort in Brazil.  He had been living with a younger woman who apparently sheltered him in her home country.  Can law enforcement in Minnesota get Victor Barnard back here to face the music?

Let’s look at the allegations first.  Victor Barnard was a charismatic minister who led many of his congregation to north-central Minnesota.  They built a compound and lived there.  In addition, several young girls also moved there without their families but with their parents’ permission.  Victor Barnard was supposed to educate and lead the girls.  Recently, some of the girls have come forward with allegations that Victor Barnard had repeatedly sexually assaulted many of them over a long period.

When the allegations came out, Victor Barnard fled—missing until he was found in Brazil.

Why can’t the authorities in Minnesota simply pick up Victor Barnard and bring him back?  What process must they use?

They lack any jurisdiction in Brazil and don’t have any right to enter a foreign country and grab someone.  Instead,they  must use a legal process called extradition.  Here’s how it would work:

1.  The U.S. State Dept. would file a formal request for Victor Barnard through the president of Brazil.  She could either say yes or no.  In turn, she’d pass it on to a judicial body.

2.  The Federal Tribunal of Brazil would also review the request.  Although the U.S. has an extradition treaty with Brazil, they will not release prisoners to a jurisdiction that has either the death penalty or life imprisonment.  Minnesota doesn’t have the death penalty, but if Victor Barnard is convicted of the crimes alleged he may go to prison for life—which may cause Brazil to not allow Minnesota to grab Victor Barnard.

3.  The request goes back to the president with recommendations from the judicial tribunal.  Again, the president may not release Victor Barnard.  But if they all agree to let him go, officials from the U.S. would pick him up and return to Minnesota.

So far, Victor Barnard has a lawyer in Brazil and is fighting extradition—considering the allegations here in Minnesota, I don’t blame him.  But if Brazil won’t give him up to the U.S., they would release him from their local jail—he may go free in Brazil.  But, in the meantime, would you want to spend any time waiting in a Brazilian jail? 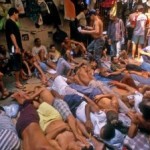 No thanks.  I think I’d want to get out of there as soon as possible.  What would you do?