Recently, I was introduced to Hans Rosling—well, he died in 2017, but I learned about his research, writing, and speaking.  I recommend you check out his work.  He’s so respected, Bill Gates has said that Rosling’s final book, Factfulness, was one of the most important books Gates has ever read.

Who is this guy?

Hans Rosling was a Swedish physician and statistics expert.  He worked for years in Africa to combat serious diseases.  That led him to work with the World Health Organization and UNICEF.  He established, in Sweden, the Doctors Without Borders program. 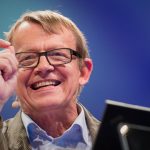 But it was his public speaking and TV programs for the BBC that really brought him to the public eye.

What I like about Rosling is his use of statistics to show facts about the world.  He believed that people tended to be pessimistic because they relied on old biases about conditions in the world rather than facts.  He focused on world poverty, child mortality rates, health issues, and population trends.  With each of these, and other issues, he tried to show us that things aren’t as bad as we think.  In fact, the 20th century may go down as the best time for humans in our long history.

For instance, watch his TED talk about The Magic Washing Machine:    https://www.ted.com/talks/hans_rosling_and_the_magic_washing_machine

Rosling points out that a simple washing machine separates the top two billion people on earth from the bottom five billion and that as more people get washing machines, they move up the economic ladder.  Poverty holds them back.

Or check out his TED talk about How Not to Be Ignorant of the World:  https://www.ted.com/talks/hans_and_ola_rosling_how_not_to_be_ignorant_about_the_world/transcript?language=en

This talk is a small introduction to his final book, Factfulness.  Rosling gives the audience a few simple tests about how things are going around the world.  My favorite was his question about how many people die from natural causes now as compared to fifty years ago.  Most people answered that the number has increased.  Rosling uses statistics to show that the number has crashed—we’re all much safer today than back in the “good old days.”

My only criticism of Rosling is that he simplifies complex issues and defends them by the use of statistics and big data.  For instance, he says that Asia (China and India) will achieve the same income levels and life expectancies as the west by 2048.  After traveling to India, I want to caution him.  If India doesn’t solve its pollution problems soon, the public health costs will swamp any economic progress they will make.