I’m excited to tell you that my new mystery/thriller, Fallout, will be released on June 1, 2012. 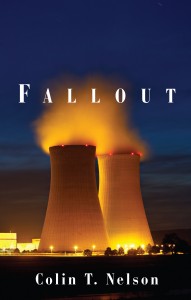 It’s a sequel to my first book, Reprisal, with many of the same characters involved in an exciting story.  Here’s what it’s about:

…He’s your average, ordinary neighbor, but he’s going to kill you.  He’s the home-grown fanatic next door with a plan and a group of true believers prepared to do the unthinkable–mass murder–to bring about a new world of peace and justice.  A county prosecutor, attempting to convict a murder suspect, stumbles upon the conspiracy.  Sounding the alarm to the authorities, no one believes her.  She risks everything–even her life–to expose the plot.  Will she be able to prevent annihilation?

New York Times bestselling author, William Kent Krueger, had this to say about the book:

“In Fallout, Colin T. Nelson has cooked up a fast,paced plot line with a little something for everyone.  Part international intrigue, part courtroom drama, part police procedural, this is a terrific thriller, with Minnesota itself in the cross hairs.  Once again, Nelson proves himself a master at conjuring the kind of nightmare that might actually come true.”

For readers of this blog, you’ll enjoy the courtroom maneuvering that the prosecutor must do to win her case as it falls apart day by day.  I give a peek at what goes on in the backrooms behind the courtrooms.  Hope you enjoy the new book!!