When people ask about my crime story books, they often want to know if they’re based on true stories.  Sometimes they are.  I worked as a criminal trial lawyer for 40 years.  Many of those stories are “stranger than fiction!”

My crime story book, The Amygdala Hijack, was based on true facts from the Twin City area.  A young man called police to tell them his wife was missing.  He found her abandoned car at the Mall of America near Minneapolis.  For weeks, police and volunteers searched areas where the wife may have gone, including a local lake.  Frozen in the winter, the police had to drill hundreds of test holes.  Still, they couldn’t find her or a body.

Did the husband kill her and hide the body?  This true crime story led me to start The Amygdala Hijack.  Defense lawyer, Ted Rohrbacher, is visited by an old friend.  He’s accused of murdering his wife—but there’s no body.  Ted reluctantly takes on the case.  As he conducts his investigation, Ted discovers his client suffers from a rare psychological condition called the amygdala hijack.  It’s a temporary malfunction of a part of the brain that controls our violent behaviors.  Ted’s client can’t control himself sometimes.

As the case gets close to trial, Ted comes to believe his friend is guilty.  But may have a defense because of the amygdala hijack.  Pressure builds on Ted as he fights the prosecutor, judge, and even his own client to get a win.

Meanwhile, no one can find the body of the wife.  If the client wins or loses—is that justice?? 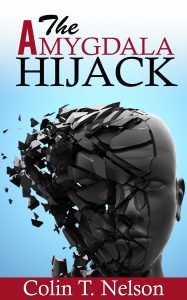 Try it out and let me know what you think.