But what if you can’t afford the time or money to go?

In southwest Colorado, ancient people built village complexes in the mountains about the same time the Incas built Machu Picchu.  It’s called Mesa Verde National Park.  Like Machu Picchu, it’s located in a remote area.  The mesas (a Spanish word for table tops) form flat areas at high altitudes surrounded by deep canyons between them.  From above, the mesas look like long fingers spread out between the green canyons.

Anasazi or Pueblo people built the villages.  Like Machu Picchu, the Anasazi disappeared, leaving their homes behind.  On the sheer cliff sides of the mesas, openings occur, large enough to fit a small village into it.  The tops of these crevices curve upward to create a natural roof.  Using hand and foot holds carved into the sandstone, the people climbed down into these crevices.  They built houses, storage rooms, religious places, and plazas.  Like Machu Picchu, these ruins have been well preserved and can be toured with a guide. 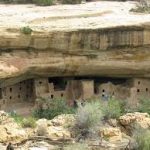 At Machu Picchu, we know why the people disappeared—the Spanish drove them out.  But why the Incas built Machu Picchu,  no one knows for sure.  At Mesa Verde, we know why they built—the tops of the mesas are fertile for growing crops and the crevices provided great shelter for their villages.  Why they disappeared from the land—no one knows for sure.  The Anasazi left suddenly, leaving many personal items behind.

If you can’t make it to Machu Picchu, go to Mesa Verde in the U.S.  The beauty of the country, nature, and the huge skies are stunning.  The best part is the night sky—there isn’t any light pollution.  The stars pop-out above you, so bright they light up the mesas.