Like many people (both men and women) who came of age in the 60’s, I admired and revered John F. Kennedy.  How many of you did also?  I read everything I could find about him, looked at those handsome poses in endless photos, and even tried to eat the things he was said to have liked: tomato soup with heavy cream.  But now, later in my “adult” life, I realize that I was tricked by JFK—we all were.

To understand the infatuation many young people felt about him, you have to remember the state of American politics in the late 50’s.  An old man named Dwight Eisenhower (or so we thought at the time although he was about my age when he was president—60’s) was running the country.  Everyone in authority was balding or had slicked-back hair.  (Think of Lyndon Johnson)  They seemed stodgy and old-fashioned.  (Think of Mamie Eisenhower’s sack dresses with small rose patterns on them)

Along came JFK, quite young for the time, who offered a full head of thick hair.  We were all mesmerized.  He looked and acted young, was in great physical shape, and had a photogenic wife who wore sleeveless tops and shorts.  Little did we suspect that we were already being tricked by JFK.  So many of my friends felt compelled to do things for their country, to “get involved,” to sacrifice for something larger than having a Coca Cola and a cheeseburger on a Friday night.  JFK inspired us to do that—to his credit.  (the only other president who’s come close to this influence was Reagan, in my opinion.) 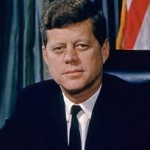 The first hints that we had been tricked by JFK started to trickle-out in the mid-seventies with a few books that questioned many of his claims and accomplishments: What really happened with PT 109? Was he really in great health or did he lie to everyone about his many illnesses?  Was he having affairs with 18 year old women in the White House?  Did he really write “Profiles in Courage?”

Today, the large and ugly truths have been revealed often, to the point my kids don’t admire John Kennedy.  They think he was “creepy.”

Although his legacy of inspiring young people is without question, almost everything else about him is up for question.  I feel tricked by JFK and disappointed.  Maybe this happens to all of our youthful heroes as we age and see the world for what it really is.  But with Kennedy, it was more.  He spent a life time intentionally creating a mythical person, most of which didn’t match the real person.  Too bad, he may have actually been a great guy if we’d known the real person.